Andy is a jack-of-all-adventures, master of none. Depending on the season, you might find him rock climbing, trail running, kayaking, skiing, mountain biking, surfing or good ol’ hiking. 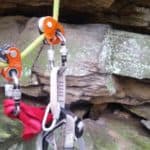 Who This Guide Is For:

In this post, I discuss my method for establishing a top rope solo system for easy-to-intermediate rock climbs. Where possible, I follow the advice of gear manufacturers and expert rock climbers. My goal is not to reinvent the wheel, but only to show you a real-life application.

This guide is a personal opinion only! I am a recreational rock climber, not an AMGA-certified mountain guide. You are 100% responsible for your own decisions. Yer gonna die.

Who This Guide Is NOT For:

This is not for new rock climbers! Any type of solo rock climbing, even on a rope, increases your danger by 10x. You no longer have the security of a partner to check your knots, question your logic, or carry you to safety in the event of an accident. 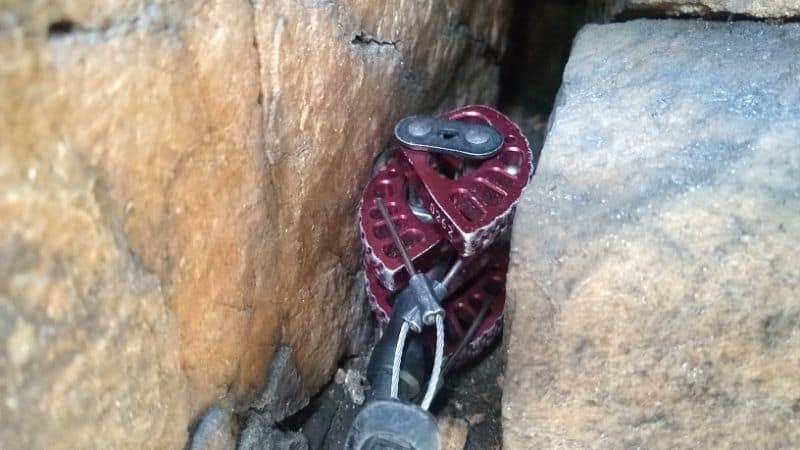 What Are the Dangers of This Activity?

Warning! Spending time in the Great Outdoors can be hazardous. Inclement weather, broken gear, poor judgment, failing transportation, freak accidents, bad luck and Acts of God can befall you at any time. This Gear Guide was originally compiled in good faith. It may not have been recently checked for accuracy or mistakes. You participate in adventure at your own risk. This Guide does not replace qualified instruction and experience. The Guide author or the Site cannot be held liable for any damages or injury.

Hopefully, it’s obvious that top rope soloing is a dangerous activity. And there’s no way to completely mitigate that risk.

You are in charge of your own safety.

I have a saying when I climb alone: “Wait to weight; dress n’ stress.” In other words, carefully weight the rope system on safe ground before climbing or rappelling, and dress and tighten all knots before trusting them.

What Is Top Rope Soloing?

No, this isn’t how to become Alex Honnold. Unlike “free soloing,” top rope soloing still requires a rope! But rather than climbing with a partner who dynamically belays you from the anchor of the pitch, you climb alone, ascending a fixed top rope with a self-belay device (or two, as you’ll see).

Top rope soloing is a dangerous activity only recommended for experts. But it’s a pseudo-necessary skill for many rock climbers, especially athletes who can’t find a friend who enjoys time on the rock.

Where to Learn About Top Rope Soloing?

I’ve been top rope soloing for three years. I won’t claim to be an expert, but I take my gear seriously. I’m an avid student of American Mountain Guide Association (AMGA) manuals. You won’t learn how to set up a top rope solo system just by reading this gear guide! You must educate yourself.

Currently, the Bible of top rope soloing is the guide from Petzl. Stop what you’re doing and go read it.

If you don’t own these books already, I highly recommend:

I have also found the pay-by-donation Ebooks at VDiff Climbing to be very helpful.

If you prefer YouTube, check out the Wide Boyz, JB Mountain Skills, and VideoOracles.

There are many ways to set up a top rope solo system. Most of them are wrong and dangerous.

I have adopted the two-devices-on-one-rope method as outlined by Petzl. This is what most other climbers choose, too.

(Technically, the two-devices-on-two ropes method is arguably safer and facilitates easy transitioning to mid-route rappel. But even my 70m rope isn’t long enough to climb many of my chosen routes on a two-rope system. Plus twice the rope management. Plus twice the anchor building. And twice the pack weight. See what I’m saying?)

Here is the setup Petzel recommends:

I’ll chat more about gear selection later. For now, I want to highlight a few differences between my system and Petzl’s textbook recommendation: 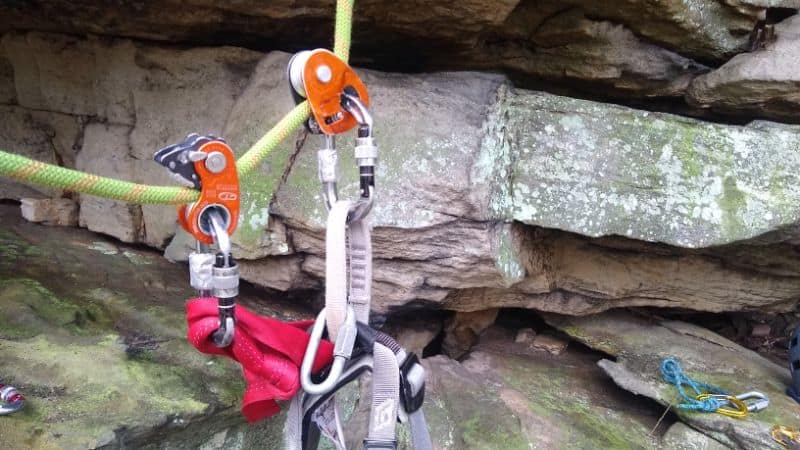 What About the Top Rope Anchor?

A full discussion of how to build a top rope anchor with a fixed rope is way, waaay outside of the scope of this gear guide! But here’s a hint: My favorite way to fix a top rope line is either:

You can untie either knot with tired, worn-out hands, even if you’re wearing gloves.

Either method will result in one or two bights of rope, which can attach to your anchor masterpoint with two locking aluminum carabiners or a single steel locking carabiner.

I have not included any anchor building materials. Bring according to your needs! Because many fixed anchors are designed for lead-climbing and are not easily accessible from the top, you may need to rappel down to the anchors to rig the fixed top rope.

There is NO perfect self-belay device.

As of today, to my knowledge, no manufacturer has developed a device specifically for top rope soloing. All devices have been adapted from other purposes.

Most so-called “top rope self-belay devices” are actually designed as one of the following:

The most popular device for top rope solo is probably the Micro Traxion.

Other popular devices include:

This list is relatively short. I suspect someone, somewhere, has tried to adapt every belay/clamp/pulley/fall arrester device that has ever been made for top rope soling.

None of these devices are designed to catch long falls. Regardless of teethed or toothless designs, most will shred, slice or strip the rope at higher forces generated by excessive slack or lead falls (4-6 kN).

(In my experience using a Petzl Micro Traxion as my primary self-belay device, I’ve never observed any rope damage – not even fuzz.)

Some climbers have attempted top rope soloing with the Petzl GriGri or other autoblocking belay devices. These devices do not self-feed; you must intermittently pull slack through the device. In my opinion, this completely defeats the ease and safety of top rope soloing, and I advise you to stay far, far away from it. If you do choose this method, climb at least a grade below your onsight climbing level.

Some people choose to use a Petzl GriGri because it easily converts to a lower (rappel). In my opinion, this convenience doesn’t outweigh the danger of accidentally engaging the GriGri handle. I can convert to an ATC lower in less than 1-2 minutes on a hanging rappel – it just takes practice!

No matter what device you use, ask yourself these questions:

The carabiners with which you connect your self-belay devices to your harness should be oval, locking, anti-crossloading carabiners.

Petzl recommends clipping the upper self-belay device through your tie-in points using a custom quickdraw, as you can see from their drawings. Petzl recommends the quick draw to be made from a nylon dogbone, a steel Maillon Rapide link* (wrenched tight), and an oval locking carabiner.

In a pinch, you can also girth-hitch an 18mm half-length (30cm) sling through your tie-in points and clip into the two end loops. Slings are much more likely to snag and twist compared to a quickdraw, though.

Even though Petzl recommends a steel rapide link, I’ve never seen one used. Tightening and untightening a steel rapide link with a wrench is a pain. You could use a screw-gate, magnetic, or twist-lock carabiner instead, but those could theoretically open from being pushed, prodded or rubbed the wrong way.

My preferred solution is actually to double up my belay loops. My harness has two belay loops (one DIY), so I clip one device to Loop A and one to Loop B. 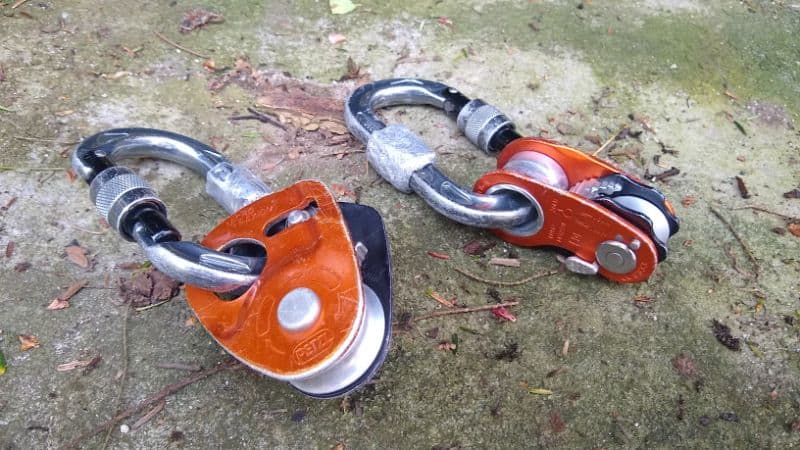 Oddly enough, the best rope for top rope soloing using the one-rope-two-devices method is not either of the classic climbing ropes!

Many climbers, including myself, prefer a semi-static rope. Semi-static rope is commonly marketed as caving or canyoneering rope. It is tested to EN 1891 specification.

Why semi-static rope? Unlike a true static rope, it has some shock absorption qualities. These ropes are tested to arrest fairly severe Factor 1 falls. This is critical for when you’re climbing close to your anchor, slip, and shock load the system. Yes, it’ll happen!

Unlike a dynamic climbing rope, however, a semi-static rope doesn’t stretch so obnoxiously far (no more than 5% static elongation at 150 kg/330 lbs).

Top rope soloing with a dynamic rope is no fun. You can drop 5-10 feet at the bottom of a route just from rope stretch, which is super annoying when you’re rehearing a crux move. And dynamic ropes don’t protect the first few moves, where rope stretch would still allow you to bonk into the ground.

Use a burly 9.5-10.5mm rope. You want a rope with a thick sheath for maximum durability against abrasions. Purchase whatever length you prefer.

You should weight the bottom of the rope to facilitate automatic rope feeding. I’ve found that best solution is to tie a Kleimheist prusik with 6mm paracord around the climbing rope and use a snapgate carabiner to connect whatever weight you have – water bottle, rock, pack, etc.

The prusik works best because it’s adjustable. If you tie a hitch or a knot in the climbing rope, you’ll often find that after rope stretch, it’s too low to the ground.

Pro Tip: If you didn’t bring a water bottle, you can weight the bottom of the rope just by making a daisy chain sinnet. 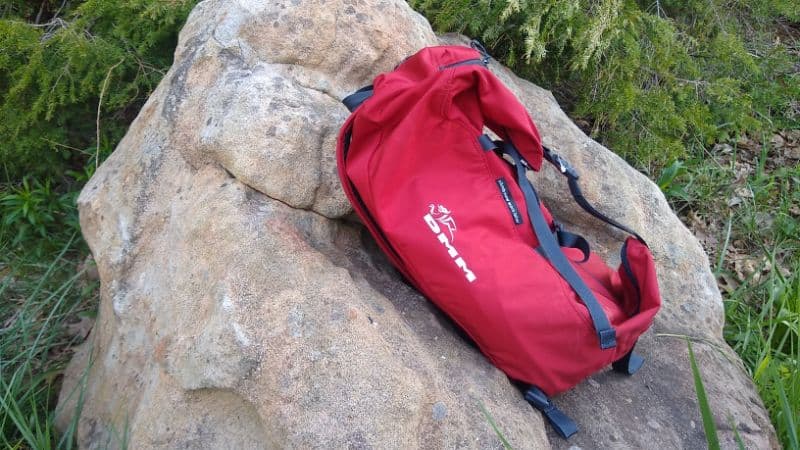 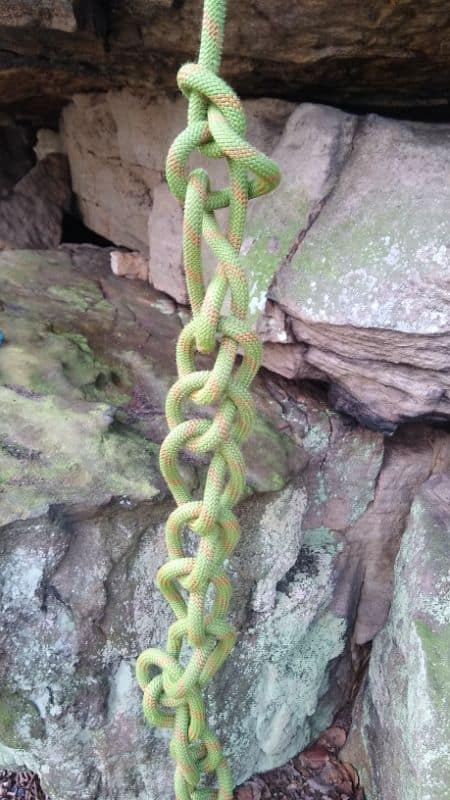